Mosonmagyarovar is situated in the meeting point of the rivers Moson-Danube and Lajta, 15 kms far from the Austrian and Slovakian border. The main attraction of the town is the thermal spa. The thermal hotels offer an excellent relaxation opportunity in Mosonmagyarovar. A multitude of castles, ruins, museums and statues are available to the tourists and the hotels await the guests, looking for relaxation and recovery, with thermal spa entrance tickets and discount half-board packages in Mosonmagyarovar.

Mosonmagyarovar
The 3-star Thermal Hotel was built in the area of the thermal baths in 1999 close to the centre of Mosonmagyarovar. The thermal water of the town has been ranked among the 5 most effective curative waters of Europe. The health hotel has a medical surgery, a treatment department and a dental surgery. The wellness centre of the hotel was opened in December of 2002. 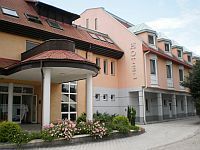 Mosonmagyarovar
The 3-star Aqua Hotel Termal and Family Resort located on the area of the thermal bath of Mosonmagyarovar awaits its guests with 74 well-equipped rooms, a restaurant and own wellness and therapeutic section. The hotel guests can enter the bath and use the wellness services of Flexum Medicinal Spa free of charge.

Mosonmagyarovar
The 3-star Hotel Minerva*** is located in the centre of Mosonmagyarovar, only 300 m from the spa. The thermal water of Mosonmagyarovar is recognised as medicinal water, has been ranked among the 5 most effective curative waters in Europe. Due to a renovation in 2004 the hotel awaits its guests with rooms of high standard, an own restaurant and guarded parking places. The hotel – due to its situation – can be an ideal starting point for excursions to Austria and Slovakia.